The starch industry is a fundamental link in the value chain between agriculture and thousands of end products in food, feed and industrial applications. Like many other first transformation industries, Starch Europe is committed to improve the sustainability of starch products and ingredients. This statement attempts to answer the main questions which could arise from stakeholders, covering the three pillars of sustainability:

The European starch industry manufactures over six hundred products including native starches, modified starches, liquid and solid sweeteners as well as oils, proteins and fibres.  The versatility of starch products is such that they are used as ingredients and functional supplements in a vast array of food, feed and industrial applications.

In 2014, the European starch industry generated a turnover of 8.3 billion Euros. It also invested 380 million Euros, of which over 140 million Euros in Research & Development. EU starch plants are often located in rural areas in which they are one of the major, if not the biggest, employer in the region.

Starch is the most important carbohydrate in the human diet. In food applications, which represent 60% of starch applications in Europe, the starch industry constantly works towards bringing innovation to its products in order to offer nature-based ingrédients that enhance texture, flavour and nutritional values. According to the United Nations’ forecast, the world population will rise to 9 billion people by 2050. Demand for carbohydrates will continue to increase. That is why the EU starch industry endeavours, thanks to constant R&D, to bring innovation to its products in order to offer nutritive and functional  food ingredients such as starches, sweeteners, fibres and proteins.

In addition to its uses in many food products, starch has multiple industrial applications. Ranging from hydrolysed wheat starch found in shampoos to dextrose found in pharmaceutical applications, the European starch industry is continuously innovating to meet changing customer and consumer needs for new applications and uses, developing the functionalities of the starch products and also replacing fossil-based ingredients with renewable and biodegradable starch-based ones.

During the starch production process, the European starch industry also produces 5 million tonnes of valuable oil, fibres and proteins which are used primarily for animal nutrition. The more starch the industry produces, the more protein and fibre-rich co-products it produces, thus providing GM free feed and helping to compensate for the EU’s structural deficit in proteins.

The production of the raw materials grown in the EU is regulated through the Common Agricultural Policy. The European starch industry uses more than 95 % of EU-grown agricultural raw materials. This provides customers and consumers with a wide range of benefits in terms of sustainability.

The three priorities of the CAP to protect the environment and rural heritage of Europe are:

In order to receive EU payments, farmers must respect a set of stringent regulations of the CAP such as:

On top of that, many of the rural development programmes promote environmentally sustainable farming practices, such as agri-environment schemes; these are voluntary schemes introduced by the Member States to grant additional money to farmers implementing these schemes.

These rules either incentivise or penalise farmers and provide the users of EU-grown biomass with guarantees in terms of environmental and land management sustainability. Users of products based on EU grown biomass can therefore rest assured that this biomass already is meeting, and audited against, the EU CAP standards.

The starch industry does not only produce starch. The over-riding objective of starch producers is to valorise all the components of the agricultural raw materials. It processes every part of the plant and produces minimal waste; less than 1% is not valorised. 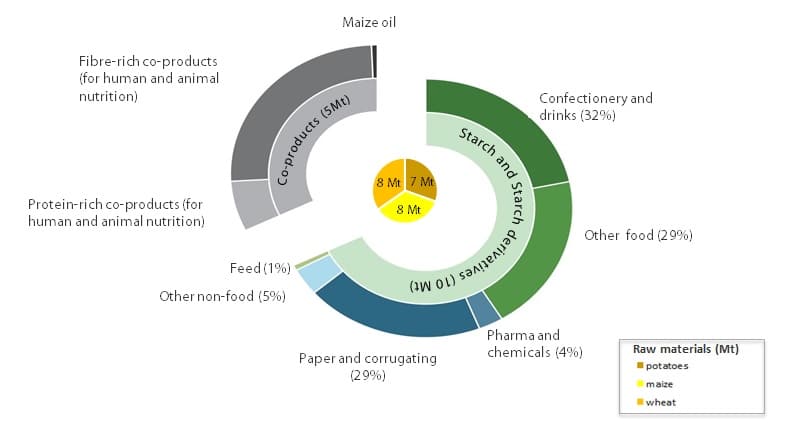 During the manufacturing stage the European starch industry is committed to combining efficient production with effective environment protection practices, by using:

Starch Europe’s members strive to continuous improvement and have agreed to a joint industry environment policy.

Starch-based ingredients extend the shelf life of food products, thereby reducing food waste, an acute issue in today’s context of food security and resource scarcity: the many properties of starch, including to preserve, bind, texturize, thicken, stabilise and gel enable food producers to provide EU consumers with a wide range of long shelf life products. That leaves more time for supermarkets to sell them, and/or more time for consumers to store and eat them, reducing the amount of food that goes to the bin.

Starch-based ingredients help preserve the aspects of food such as taste, smell, sight and touch. For instance, many bakery products including bread, depend for their elasticity, shape and rising characteristics on wheat gluten, a key co-product of the starch industry. Glucose syrup inhibits sugar crystallisation, improves taste and consistency and enhances the spreadability and flavour of jams, jellies and food preserves. The production of dry sausages, frankfurters, salamis, brine cured hams, surimi, all require the use of starch products

40% of starch goes to industrial applications, often as a renewable alternative to fossil fuel ingredients, in products such as papers, plastics, paints, pharmaceuticals, detergents etc.

In 2015, it published its updated LCA, in order to bring its study in line with the most updated and recognised methodologies and databases and ensure that it is consistent with the EU’s draft Product Environmental Footprint (PEF) guidelines. The study is an update of the comprehensive LCA study conducted in 2012.

The 2012 study, which followed on from an earlier LCA study in 2001 for some products, made the EU starch industry one of the first agri-food sectors to conduct such a detailed and multi-product study on a sectorial level. The LCA has also sought to identify the hot spots of environmental impacts, helping the European starch industry strive for continuous improvement in that field.

The conclusions of the latest study quantify the outstanding performance of starch operators in resource efficiency and valorisation of the biomass.

Starch factories are located in rural areas, where they often provide the main source of employment. On the whole, the European starch industry generates 14.600 direct jobs and about 100.000 indirectly linked jobs, mainly in agriculture[9].

Starch Europe’s members operate within EU boundaries and comply with the employment and health and safety legislation of the Member States they operate in. In line with the fundamental principles of the International Labour Organisation (ILO), starch operators in the EU prohibit in their own operations child labour, physical punishments and forced labour. Right is given to workers to join and organize associations. Any behaviour that goes against those principles, particularly any type of moral or sexual harassment is prohibited. Caution is given not to trigger any kind of discrimination in respect of employment and occupation.

The starch production process is highly automated and many of the employees of the EU starch industry are operating potentially dangerous machinery. Employee health and safety is therefore a priority concern for all Starch Europe members.

will be publicly acknowledged by their peers in the industry through an industry award/certificate. The first awards will be granted in October 2015.

[1] 2014 annual data; investment figures are averaged over 2013-2014.[2] 2014 figure and estimate for direct & indirect employment figures respectively.[3] The European starch industry has adopted the definition of CEN TC 308 WG 3 N33 of May 1999 that reads as follows: “A co-product is a material of commerce intentionally and unavoidably created in the same process and at the same time as a principal product. Both a product and a co-product may each meet a specification or design and individually can be used directly for a particular purpose.” For example : wheat gluten, corn gluten feed, corn gluten meal, corn germs, wheat feed, corn steep liquor, pulp, concentrated fruit water, potato fibres, potato proteins.[4] Overall, the European starch industry produces close to zero waste. Recent Life Cycle Assessment results “show that on average 7,7 kg of waste for landfill and incineration is produced per ton dry substance input of wheat, maize or potatoes. If presented as a ratio, wastes of the production processes represent less than 0,8% of the raw materials used in weight.” (in the full summary report of “Life Cycle Assessment study of starch products for the European starch industry association (Starch Europe): sector study”, page 16, available at  (https://starch.eu/wp-content/uploads/2015/05/LCA-study-summary-report-2015-update.pdf)[5] 2013/2014 marketing year, European Commission’s balance sheet, last update 27/08/2015:   http://ec.europa.eu/agriculture/cereals/balance-sheets/cereals/2013-2014_en.pdf[6] For more information on  what the European starch industry  integrates in its daily processes please see: https://starch.eu/environmental-policy-2/[7] Page 5, Sustainable benefits of Corn Wet Milling, www.cra.org[8] https://starch.eu/aaf-position-on-the-bioeconomy.[9] 2014 figures & estimates.