As of 1 October 2017, production and export restrictions will be lifted and European sugar producers will be able to produce and export as much as they want. 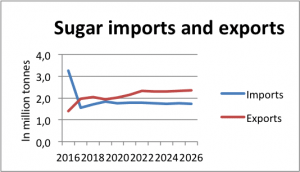 Today, the European Union is responsible for nearly 50% of the world’s total sugar beet production (sucrose), making it the top producer of beet sugar. The end of the sugar production quota regime will create a favourable condition to increase EU beet sugar production and export it to the world market.

According to the International Sugar Organization, the next two years will see a 5-6 million tonnes deficit in sugar supply worldwide[6], which means that world sugar demand is expected to increase. This could give a significant boost to EU sucrose exports. 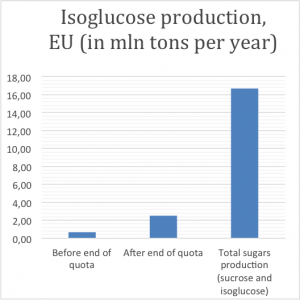 Because of its liquid form, isoglucose is more difficult to transport than sucrose so its export potential is limited. However, isoglucose’s liquid form lends itself to being mixed with products such as drinks or ice creams, as opposed to sucrose’s more solid crystallised form.

As a result, it is anticipated that most of the production volume will be used for EU internal consumption, by replacing sucrose in some food applications.

The European starch industry estimates that future market demand for isoglucose produced in the EU could reach around 2-3 million tonnes annually compared to 720,000 tonnes under the current regime. This volume represents between 12-18% of the total EU sugar consumption in a post-quota environment. Moreover, this potential will be fully realized only over time and will largely depend on customer demand. These forecasts are in line with the forecasts of the European Commission, which estimates that EU isoglucose production will reach 1.9 million tonnes by 2026 (representing about 10% of total EU sugars production)[7].

It is difficult to predict the future trends of the EU sugar market. As for any market commodity, production volumes depend on a number of factors, including sugar prices, prices of raw agricultural materials (wheat and maize) and demand from food manufacturers. Yet, by looking at the combination of export-led growth, which will benefit sucrose and the anticipated use of isoglucose mostly in replacement of sucrose, our expectation is that the end of the quotas will not lead to any increase in European sugar consumption.

In many food applications, sucrose and isoglucose can be used interchangeably without altering the taste of the final product.

The main reason for this substitution is the functional advantages of isoglucose. As a liquid syrup it is easier to use in certain food applications than sucrose. Moreover, isoglucose can improve the product’s texture, colour and enhance flavour better than sucrose.

Because of these properties, some food manufacturers may decide to replace sucrose with isoglucose. Replacing one with the other has no impact on the energy content of a product because the caloric value of isoglucose and sucrose is the same: 4 calories per gram.

Isoglucose with a fructose content between 42% and 55% replicates the sweetness of sucrose (which contains 50% fructose). These varieties of isoglucose are most likely to be used by food manufacturers as alternatives to sucrose, once sugar production quotas have been abolished.

Isoglucose with a 55% fructose content is used in many food products in the US and is referred to as High Fructose Corn Syrup (HFCS). Over the past decades, the widespread use of HFCS in the US has sparked some research into the impact of its consumption on health. Some initial studies[8] suggest a correlation between increased consumption of HFCS and growing obesity levels, while some animal studies indicate that excessive fructose consumption may lead to lower life expectancy and reproductive deficiencies in rodents[9].

However, scientific evidence confirms that there is no causal relationship between HFCS consumption and obesity in humans and that the effect of HFCS consumption is no different from that of any other caloric sweetener [10].

This is well-illustrated by the fact that the HFCS consumption in the US has been declining since 1998[11], yet US obesity levels have continued to increase.

In June 2008, the American Medical Association stated that “HFCS does not appear to contribute to obesity more than other caloric sweeteners”[12]. This finding was reinforced by the US Academy of Nutrition and Dietetics in 2012 who noted that “High Fructose Corn Syrup is nutritionally equivalent to sucrose. Both sweeteners contain the same number of calories (4 per gram) and consist of about equal parts of fructose and glucose. Once absorbed into the blood stream, the two sweeteners are indistinguishable”[13].

Nor is there any evidence that fructose used in isoglucose has any specific adverse effects compared to fructose found naturally in fruit and honey. It does not matter where fructose comes from – either from fruit or isoglucose – it will be metabolised by the human body in the same way[14].

Obesity is a complex issue, created by many interacting factors, including genetic, metabolic, behavioural, psychological and socioeconomic aspects. Even in food, it is not a single ingredient that contributes to obesity, but is the overall dietary regime when there is excessive calorie intake and lack of physical activity. In its 2016 factsheet on obesity and overweight, the World Health Organisation (WHO) states:

The fundamental cause of obesity and overweight is an energy imbalance between calories consumed and calories expended. Globally, there has been:

Changes in dietary and physical activity patterns are often the result of environmental and societal changes associated with development and lack of supportive policies in sectors such as health, agriculture, transport, urban planning, environment, food processing, distribution, marketing, and education.

Although the production of isoglucose with a 55% fructose content is likely to increase after the end of quotas, its market share will never reach the same level as in the US (36% share of the US sugar market), due to the different dietary preferences of European consumers (e.g. the per capita consumption of soft drinks in the EU is much lower than that in the US).

According to European Commission and industry estimates, the market share of all isoglucose (including other types with lower fructose content) will represent just below 10% of the EU sweetener market by 2026”[16].

Regulatory and societal trends at play, such as the increasing number of policy recommendations and industry commitments to reduce the sugar content of several foods and drinks, suggest that total sugar consumption in the EU will remain stable or even decrease, despite the end of the sugar production quota. 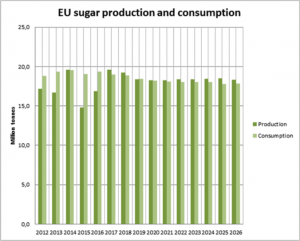 In 2016, the European Commission launched discussions with EU member states and industries to reduce the added sugar content across eleven categories of products by 10% in 2020 (the so-called “Added Sugar Annex”). The initiative aims to encourage food manufacturers to reformulate their products, reduce the portion size or increase the sales of products with a lower sugar content.

Even before the Added Sugar Annex, the industry started responding to these signals with a number of prominent food brands and industry associations pledging to reduce the sugar content of their products by a certain deadline. More recently, the European soft drinks industry (UNESDA) announced it will reduce added sugars in its products by a further 10% by 2020 and FoodDrinkEurope, the organization of Europe’s food and drink industry has just launched a Call to Action urging all interested stakeholders to work together to achieve a 10% reduction in energy intake in the EU population by 2020.

In light of these policy and industry developments, it is unlikely that the end of the quota system will bring food manufacturers to use more sugars (including both sucrose and isoglucose) in their products.

[6] As reported by the European Commission in their sugar market presentation, slide 9, https://ec.europa.eu/agriculture/sites/agriculture/files/sugar/presentations/market-situation_en.pdf. After years of surplus, ISO forecasts a world-wide sugar deficit of 5.4 in 2015/16 and 5.9 in 2016/2017.

[8] Bray GA et al. Consumption of high-fructose corn syrup in beverages may play a role in the epidemic of obesity. – The American Journal of Clinical Nutrition 2004 Oct;80(4):1090.

[10] The Health Effects of High Fructose Syrup, Report 3 of The Council on Science and Public Health (A-08), The American Medical Association. Also see Moeller et al. 2009 the effects of high fructose syrup. Journal of the American College of Nutrition, 28(6) 619-26.

[12] The Health Effects of High Fructose Syrup, Report 3 of The Council on Science and Public Health (A-08), The American Medical Association. Also see Moeller et al. 2009 the effects of high fructose syrup. Journal of the American College of Nutrition, 28(6) 619-26.

The European starch industry is built on constant innovation

The European starch industry is a long-established part of the agri-food value chain, built on constant innovation to meet societal demands and consumer expectations.

We offer a vast range of plant-based ingredients improving food and drink.

We offer a vast range of plant-based ingredients, including carbohydrates, proteins and fibres, to make food and drink taste better, last longer, and be more sustainable and nutritious.