AAF position on the bioeconomy

THE EUROPEAN STARCH INDUSTRY’S PAST, PRESENT AND FUTURE CONTRIBUTION TO BUILDING A BIOECONOMY IN EUROPE

The starch industry is not only an important contributor to the EU bioeconomy, it is one of its pioneers

In 2012, the European starch industry processed about 23 million tonnes of agricultural raw materials, split between maize (7.7 million tonnes), wheat (7.8 million tonnes), and starch potatoes (7.5 million tonnes) into over six hundred products, from native starches to physically or chemically modified starches, through to liquid and solid sweeteners. The versatility of starch products is such that they are used as ingredients and functional supplements in a vast array of food, non-food, and feed applications.

From 68 starch production facilities in 21 of the 27 EU Member States, the European starch industry today produces close to 10 million tonnes of starch each year. EU consumption of starch and starch derivatives was 8.9 million tonnes in 2012.

Valorising all of its agricultural feedstock efficiently and sustainably

The starch industry does not only produce starch. The over-riding objective of starch producers is to valorise all the components of the agricultural raw materials it extracts and processes and produce minimal waste; less than 1% is not valorised. During the starch production process, the European starch industry also produces 5 million tonnes of valuable oil, fibres and proteins which are used for both animal and human nutrition. The more starch the industry produces, the more protein and fibre-rich co-products it produces, thus providing high quality feed and helping to compensate for the EU’s structural deficit in plant proteins.

Non food uses are part of the history of starch

Ever since the starch industry began, starch has been associated as much with its non food uses as with food ones. The first historic references to starch, which date back to 4000 BC, describe its use by the Egyptians in strengthening papyrus. Its use as an adhesive in paper persists to this day, with the starch content of some modern day paper being up to 10%. In the 16th century in Europe the major outlet for starch was a stiffener in the textile industry, again a use for which it is still associated today.

Starch is renewable and biodegradable. As such it is a well-suited raw material for the sustainable use of agricultural products in the bio-based industry. On top of the more traditional non-food outlets like paper and textiles, the EU starch industry today produces bio-based products that are used as raw materials, generally replacing fossil-fuel-based ingredients, in the fermentation, construction, chemical, cosmetics, plastics and detergent industries. In an effort to expand and develop  this list of non-food outlets further the EU starch industry makes considerable investments in Research and Development (over 100 million Euros annually), most of it in the development of bio-based products.

It is precisely because the starch industry is not dependent on any one final product or any one final outlet for its products, that it has successfully developed over many centuries. This has not only benefitted the starch industry itself, but also its customers and the many farmers who depend on it both as a consistent and reliable user of their produce in times of fluctuating food prices, and as such, as an essential contributor to the balance of crop rotation in the field. 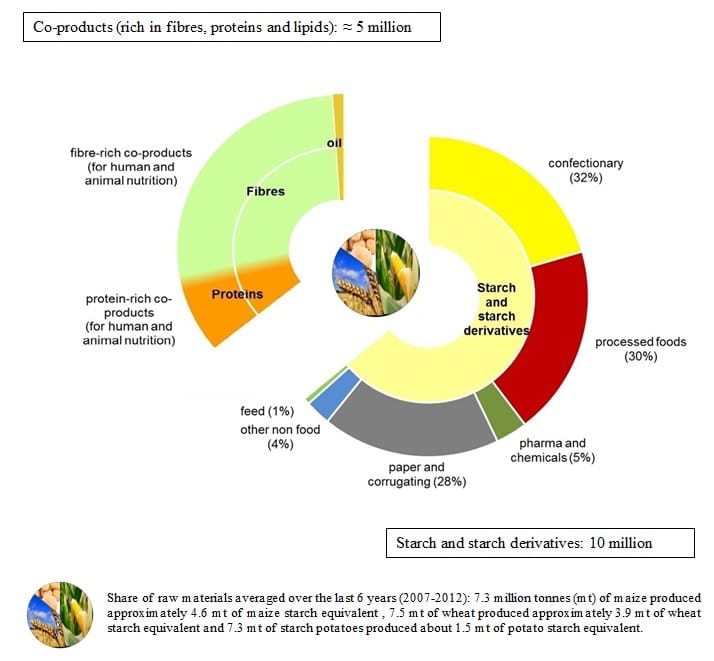 Mankind is today facing three challenges that need to be tackled simultaneously: food security, climate and environmental change, and increasing energy demand. All this in a context of resource scarcity. Alternatives to fossil-fuel-based products must meet the social and environment challenge and be economically viable.

These are clearly not issues that the starch industry can address alone but renewable raw materials from agricultural origin, like starch, are well-positioned to play a key part in addressing some of these challenges. The responses to these challenges will call on a combination of multiple solutions, including to name but two, those which promote alternative energy sources, and reduce food waste. For its part, what the EU starch industry can do, as it has been doing for many decades, is to help to continue to reduce the EU’s dependence on fossil fuel ingredients in chemical and industrial applications, whilst at the same time providing a sustainable and reliable outlet for EU farmers in times of increasing uncertainty, and reducing the EU’s protein deficit.

Furthermore, and research is at a very preliminary stage bearing in mind the lack of 2nd or 3rd generation bio-mass technology available today, the combination of impurities it contains and the lack of strong enough enzymes means that this bio-mass is not yet suitable for a number of the bio-based applications for which starch is currently used.

Given its long history in the bioeconomy, the EU starch industry, not surprisingly, welcomes the fact that the role of bio-based products as alternatives to fossil-fuel counterparts, and their importance in developing a sustainable economy based on renewable materials in Europe, both today, and potentially even more so in the future, is now being increasingly recognised by EU decision makers. Examples of this support include the EU 2020 strategy focus on the bioeconomy, as well as initiatives such as the Lead Market Initiative on bio-based products, the EU’s new industrial policy “ A stronger European Industry for Growth and Economic Recovery” and the European Commission Communication of February 2012 on a Bioeconomy for Europe. The AAF feels that these initiatives provide the framework for a strong policy basis for developing the bioeconomy in Europe, the economy of the future. Today’s challenges will trigger a paradigm shift to shape a circular bioeconomy and the European starch industry will continue to pro-actively contribute to the implementation of the Bioeconomy Action Plan.

What further EU action is required?

-          EU decision makers must recognise that the bioeconomy, though a relatively new political term, is not a new economic development. Economic actors like the starch industry have been actively contributing the EU bioeconomy since their development. The first prerequisite to capitalising on and increasing that contribution is not to develop any policy which may undermine the contribution already being achieved.

-          EU legislation and policies must allow renewable raw materials for industrial use to be available in sufficient quantity of good and guaranteed quality and at competitive price.

-          The European Union needs an agricultural policy to promote the production of renewable raw materials for all industrial uses (biobased materials and bioenergy).

-          Other demand-driven measures, can also help create the market pull needed to further boost consumer uptake of bio-based products. The appropriateness of some of these measures is likely to be dependent on the economic situation and may vary between Member States. The EU tool box included in the Lead Market Initiative contains Green Public Procurement, tax breaks, certification and labelling tools and, targets as potential demand driven measures.

-          For the Lead Market Initiative and the EU’s Bioeconomy strategy and Action Plan to have a chance of success a pre-requisite is consistency between EU goals and policies and synergies with initiatives in the EU’s Member States and regions.

-          The European Union needs to increase public funding for demonstration projects and stimulate the construction of demonstrators via Public Private Partnerships:

The European Starch industry is convinced that all partners in the biobased chain need to work together in partnerships to jointly develop solutions for the many challenges the collective biobased sector still faces. We have a joint interest in making Europe the biobased leader in the world, with a supportive policy environment which provides long term stability for investment decisions to be made, implemented and made a success. Without this, businesses, including EU starch producers, will reconsider investing in Europe.